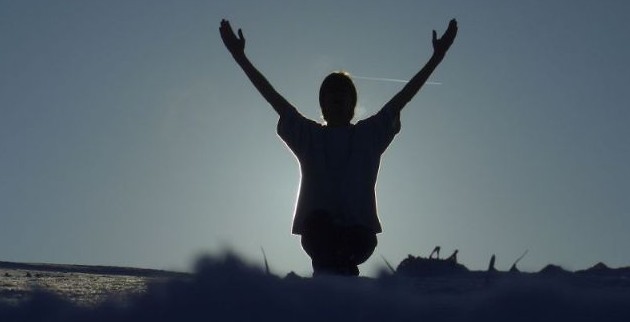 Then in January of 1981, at the age of nineteen, I began to develop an insatiable desire to read the bible. Up to this point in my life, I never had anyone share the Gospel with me nor speak about a personal conversion experience. I know there must have been some “Jesus Freaks” in my high school, but I didn’t know any. So I had no category for a biblical understanding of a personal, saving relationship with Jesus Christ. I just found myself day after day picking up the family Bible that sat on the coffee table for years but was never opened except to record baptisms, confirmations, and marriages. Knowing nothing about the Bible, I roamed around in what I think was Genesis until I found the red letters in one of the Gospels and realized they represented Jesus’ sayings. I was captivated by the self-authenticating words of Jesus. Then I was overcome by the culmination of his purpose in life, which was to die in the place of sinners in order to bring total and everlasting forgiveness to them.

During these days, it felt as if I were the only person in the world who was obsessed with Jesus and his death on the cross. I was utterly convinced that somehow he was the answer to everything. If someone were spying on me as I sat there on the living room couch reading the Bible, they would have witnessed a calm silence not knowing that inside of me there was a hurricane blowing. The wind of the Spirit was saying, “This is true! This is the answer to the turmoil you have been going through over the last six months. This is the answer to the problem of existence as a finite, sinful, death-doomed nineteen-year-old kid.” While reading one of the Gospels during these early weeks of 1981, I walked into the kitchen and said to my mom, “Why didn’t you ever tell me about Jesus?” I now realize that that was not a statement about my mom, but it was the fruit of seeing the reality of Jesus Christ with the eyes of my heart. The wind blew through my heart as Jesus said, “The wind blows where it wishes, and you hear its sound, but you do not know where it comes from or where it goes. So it is with everyone who is born of the Spirit.” (John 3:8).

I was coming to grips with what Pascal went on to say: “There once was in man a true happiness of which now remains to him only the empty trace, which he in vain tries to fill from his surroundings, seeking from things absent the help he does not obtain in things present. But these are all inadequate, because the infinite abyss can only be filled by an infinite and unchangeable object, that is to say, only by God Himself.” In other words, inside each of us is a God-shaped vacuum. We all come into this world with a longing for joy and meaning and significance that cannot be satisfied by anything other than the presence of God Himself.

I was still a pot-smoking drunk, but something was different. And what was different was that I had a deep affection for Jesus and what he accomplished on the cross 2,000 years ago. It felt that true happiness may actually be attainable, that the person of Jesus may be the one true object that fits this gaping hole inside of me.

This new hunger led me to enroll in a course about the New Testament at the local community college. The class consisted mainly of middle-aged people, along with this nineteen-year-old kid; all of whom were searching for answers. So there I would be on a Wednesday evening, sitting in my car in the college parking lot, smoking a joint as I guzzled another beer. But that did not keep me from looking forward to this three-hour course on the New Testament once a week. During this time, I had no paradigm that said smoking pot or getting drunk was incongruent with reading the Bible and hoping it was true. I was the same guy, hanging out with the same friends, going to the same parties, buying the same quarter-ounce of marijuana a week, and getting drunk on a daily basis. It’s just that now I was blown away with a deep sense that Jesus’ death and resurrection was at the essence of the meaning of life. I would even say to friends, while getting high with them, “Hey, have you ever read the Bible. This Jesus stuff just blows me away. You’ve got to read it.”