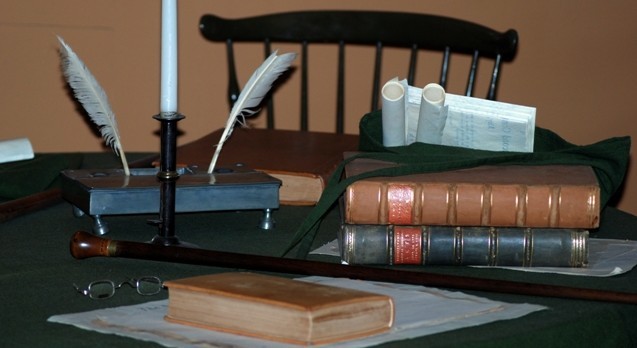 Books That Have Influenced Pastor Joe

Unity of the Bible

The contents and the structure of this book, along with Dr. Fuller's Socratic method of teaching,  had a huge impact upon my thinking in the early 1990's.

A seminary education can cause much confusion (especially now) and be an instrument for destroying one's faith and passion for God.  I owe it to Dr. Fuller (as God's instrument) for saving my biblical/theological education by leading me to see how all the parts fit together as a unity.

How to Read a Book

Adler gives a straightforward, clear and commonsensical method for interpreting the intended meaning of the words that an author uses: whether it be an article on the front page of a newspaper, a philosophical or theological treatise or Paul's epistle to the Romans.  That is why I always made the first eleven chapters of How to Read a Book required reading for my students in Bible College (Point: The meaning of the author is there in the text – work hard at coming to terms with him/her).

The Works of Jonathan Edwards

I was introduced to Jonathan Edwards' writings in the fall of 1993 by Daniel Fuller.  It was through bickering with Dr. Fuller and reading Jonathan Edwards' The Freedom of the Will that sent me into a theological paradigm shift concerning the freedom of God in salvation and the nature of the human will.  Edward's book was the doorway through which I ultimately came to embrace the "doctrines of grace" that were recovered in the 16th century by the Reformers and were preached by the 17th century Puritans.  Subsequently, I have found that the writings of Edwards are worth every hour spent in them – even if it takes an hour to grasp the profundity of five sentences.

A Treatise Concerning the Religious Affections is the most thourough analysis of the inner goings-on of a regenerated person ever written.

A Theology of the New Testament

This book (and class under Larry Powers) had a huge impact on me while in Bible College.  In my undergraduate education, all other classes and books paled in comparison to Dr. Ladd's New Testament Theology and biblical language studies.

Dr. Ladd's book opened my eyes to "the already, not yet tension" of the kingdom of God spoken of throughout the ministry of Jesus.  I have had the privilege, as an instructor, of using this as a textbook in Bible College.

A Quest for Godliness (The Puritan Vision of the Christian Life)

Dr. Packer has convinced me that I must read these 17th century men – more and more.

I was introduced to Piper's writings and preaching ministry through my professor, Daniel Fuller. After I kept hearing Dr. Fuller say that John Piper was the best pulpit preacher that Fuller Seminary ever produced, I begged him to please give me some tapes of his sermons.  Dr. Fuller handed me a box of 15-20 sermon tapes by John Piper; and since that day in 1993, I cannot disagree that he is a master preacher and the best example of how the work of exegesis and a clear vision for how the whole Bible comes together theologically are to impact the way and the content of how a pastor preaches. His books are worth the read as much as his sermons are worth the listen.

No Place for Truth, or Whatever Happened to Evangelical Theology?

Fit Bodies Fat Minds; Why Evangelicals Don't Think and What to do About It

Nine Marks of a Healthy Church

The Cross of Christ

The Holiness of God and Chosen by God